In the 1960s our country stole a nation and destroyed the lives of its people. Now is the time to put things right.

The British government expelled the people of the UK-owned Chagos Archipelago almost 50 years ago with the purpose of allowing the US to build an airbase on the largest island, Diego Garcia. It has been host to America’s largest overseas military base ever since.

The forced eviction was as cruel as it was crude. Many families that had travelled to neighbouring Mauritius to receive medical treatment were simply told they could not return to their islands for they had been sold.
Others were chased out of their home at gunpoint by the British army, forbidden to return.

“They threw us out from our house. My family didn’t have time to take clothes, only to grab something and run. There was a boat waiting. They burned our house,” said Ginette Charles, who was a toddler at the time.

“The little boys and little girls that were still on the island were told to bring their dogs. The British said: bring your dog for chocolate treats for them. And so everybody took their dog. They threw them in the fire.”

“They said to people: if you don’t get out from the island, you will go the same way.”

Dumped on the docks of Mauritius and the Seychelles, the Chagossians were forced to live in slums and animal sheds. No help came from the country that had made them homeless.

“One woman told me that to feed her children she needed to go into the bin sometimes. She’d wait for somebody to put something in the bin, take it and give it to her children,” said Sabrina Jean, the daughter of an evicted Chagossian.

Over a decade later, some of the refugees received paltry sums of compensation from the UK, ranging from a few hundred pounds to £3000. This was nowhere near enough to cover their debts, or pay for new homes.

The Chagossians are also technically British citizens, yet it took a 35-year legal battle for the UK to grant them passports. During that time they languished in poverty.

“When we won our case to get a British passport, the government in the Seychelles told us that to get help we should move to the UK. For me this was a mistake, we have no home and no money,” said Ginette.

“We don’t have a beginning. Because when you were born here, life is a bit easier. It’s very hard to restart your life,” she added. 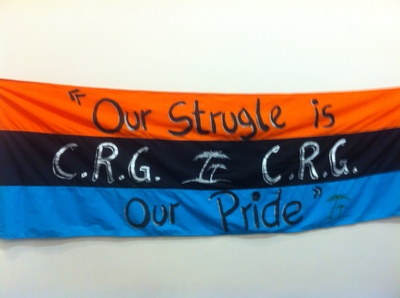 Her family faces also several bureaucratic nightmares here in the UK. Her husband of 24 years is Seychellois and therefore needs a visa to live here. This costs around £1000 to renew every three years, which is prohibitively expensive.

Her eldest son did his GCSEs in the Seychelles before they moved. And although the syllabus is based on the UK system, they are not accepted as legitimate qualifications here. Meaning he’d have to pay an unaffordable amount to further his education. Life in the UK, for him, was a non-starter so he has moved back to the Seychelles.

You may think that these people are receiving assistance in the form of state benefits or council-owned homes, but this generally isn’t the case. They have been designated low priority on the council-housing list; most live in rented accommodation and work long hours to make ends meet on minimum wage jobs. These are hard-working people doing everything they can to better the lives of their family, not getting the assistance they deserve.

Diego Garcia, once an idyllic tropical island, is now home to the US’s largest overseas airbase. There are plenty of jobs available there, yet Chagossians are forbidden from applying. There is also a continuing legal campaign for their right to return. The UK government, however, have installed several jurisdictive barriers to make this impossible. Instead, it continues to ignore the suffering and dodge responsibility.

Despite many requests, the Foreign Secretary William Hague has never met with the Chagossians or their lawyers to discuss the case.

Some may argue that we can’t change the past, which is true. But the damage done to these people is very much on-going. Giving them adequate compensation and finding a solution to enable their return is the very least that we, as a country, could do.