10 April 2018 From 2014-16, an unprecedented Ebola epidemic killed more than 11,000 people across West Africa. Now scientists have linked the outbreak to rapid deforestation. Was this wave of death triggered by environmental destruction? Katie McQue investigates

It all started with one mysterious death. Patient Zero was an 18-month old little boy, who became sick after playing near a giant dead tree that was swarming with bats. The unnamed illness crept through the village of Meliandou in Guinea, quietly picking off its victims, starting with those who had come into contact with the toddler.

The outbreak was only identified as Ebola three months later, in March 2014, by which time it had killed 30 people. The contagion coursed through the towns and villages of Guinea, then Sierra Leone, Liberia, Nigeria, Senegal and Mali. Infections multiplied at a rapid rate, killing more than 11,000 people. International travel brought cases to the West, spreading fear and panic.

In humans, Ebola causes fever, body aches, diarrhoea. At its most severe it triggers uncontrollable bleeding, both inside and outside the body. It is transmitted through contact with the body fluids of an infected animal or humans.

The contagion coursed through the towns and villages of Guinea, then Sierra Leone, Liberia, Nigeria, Senegal and Mali. Infections multiplied at a rapid rate, killing more than 11,000 people.

The virus is relatively new to humans. The very first identified outbreaks occurred simultaneously in Sudan and Democratic Republic of Congo (then-Zaire) in 1976. Before that Ebola only affected animals deep within the rainforests of Sub-Saharan Africa, never touching people, its existence unknown.

In 1976 the disease caused 280 deaths. The thirty or so outbreaks between then and 2012 had all been relatively small, the worst of them causing no more than 250 deaths, some causing none.

How the 2014 outbreak began

Meliandou is a tiny, remote village in Guinea’s Gueckedou Forest Region. By the time tragedy struck, in 2014, the region had been subject to extreme deforestation, caused by mining and lumber operations. Destroying the habitat of the animals that are natural carriers of the virus, such as the rainforest, makes interaction between these animals and humans more frequent, and viral transmission more likely, experts believe.

‘Emerging diseases are linked to environmental alterations caused by humans. Humans are in much more contact with animals when you open up a forest,’ says Professor John E. Fa of Manchester Metropolitan University, a senior research associate with the Center for International Forestry Research (CIFOR). ‘You have a balance of animals, viruses and bacteria and you alter that when you open up a forest.’

Places on the edge of rainforests are more prone to be involved in Ebola outbreaks. More specifically, scientists have recently discovered that an outbreak of Ebola is most likely to strike villages in Sub-Saharan Africa that are near areas that have experienced deforestation within the previous two years, a finding which could have profound implications for predicting outbreaks.  There is also some suggestion that the likelihood of an outbreak may peak at two years after deforestation has taken place, although researchers are unclear what the mechanism for this is.

‘You have a balance of animals, viruses and bacteria and you alter that when you open up a forest’ – Professor John E. Fa

A team of researchers published their results inthe journal Nature last year. There have been 40 Ebola outbreaks reported since 1976. Researchers were able to focus on 27 of those: where index cases (that is, the first patients, who indicate the existence of an outbreak) were identified and for which large-scale deforestation data were available over the period 2001–2014.

They found a link between recent deforestation and Ebola in 25 of these 27 cases. In addition to the 2014 West African outbreak, 16 of these were clustered around the border between Gabon and the Republic of Congo, in the western Congo basin between 2001 and 2005, and eight cases in Uganda and the east and south of the Democratic Republic of the Congo (DRC) after 2006.

‘We have found there is a time lapse of two years between deforestation and outbreak of Ebola,’ says Dr Jesus Olivero, who is an expert biogeographer – someone who studies the distribution of plants and animals – at the University of Malaga. He is one of the paper’s authors, along with Fa and a number of others.

The reason for the time lag in the virus’s appearance following deforestation has not been fully determined. It may be that it takes Ebola-carrying bats about two years to migrate to the felled area from the depths of the rainforest, says Fa. ‘These newly open areas could be attractive to animals that carry the virus. There is an association with open areas and fruit bats,’ he adds.

Curiously, every Ebola outbreak in humans has also been the result of a new introduction of a strain of the virus from an animal population. And, Fa adds, an outbreak has never occurred in the same area twice.

Identifying where a virus outbreak has a high probability of occurring is a useful tool for the prevention of future outbreaks.

Every Ebola outbreak in humans has also been the result of a new introduction of a strain of the virus from an animal population. And, Fa adds, an outbreak has never occurred in the same area twice.

In addition to deforestation, several other human factors heighten the risk and magnitude of an Ebola outbreak. One of these is locals catching bush-meat, such as that from bats, primates or antelopes found in the rainforest, and taking it to markets. This increases the risk of contracting the virus for both the hunters and customers who buy infected meat. Likewise, mining and the felling of trees to build roads through previously pristine jungles can reduce natural barriers between virus host animals – in which the virus is naturally circulating – and humans. Humans are then brought into contact with animal species they may never have been near before.

The process of a virus jumping species is known as zoonosis. With Ebola, for this to happen, humans must physically come into contact with the host species – but the species of animal the virus naturally circulates in are often hidden deep in forests.

But tree-felling and other human activities in forests change this. ‘Because of events such as deforestation and the destruction of natural ecosystems, the virus is brought into contact with humans and is ready to go,’ says Dr Heinz Feldmann, Chief of the Laboratory of Virology at the National Institute of Allergy and Infectious Diseases, in Maryland, United States. Ebola can also enter and replicate in human cells with greater ease than many other viruses, making it strongly contagious, he adds.

For the virus host animal, believed to be a certain type of bat, the Ebola sickness is much less grave than it is in humans. The virus has a comparative severity similar to that of chickenpox in human children. 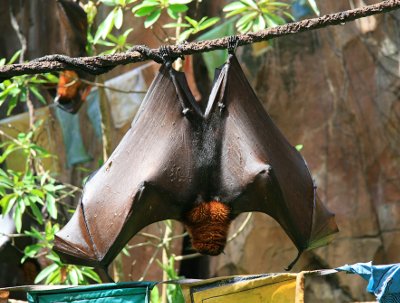 Fruit bats of the Pteropodidae family are thought to be natural hosts of the Ebola virus. Photo: Richo.Fan, CC-BY-2.0

Almost the entire population of the host species is thought to be exposed to it and while they develop some symptoms, they are able to mount an immune response and recover. As it does not kill off the host animal, this allows the virus to be transmitted elsewhere, says Dr Vincent Munster, Chief of the Virus Ecology Unit at the National Institute of Allergy and Infectious Diseases.

Can vaccines prevent another disaster?

‘At the time, there was no appetite to progress it because there was no market or clear way to make money from it,’ says Feldmann.

But preventing future outbreaks remains tricky. After the outbreak certain vaccines were swiftly moved into human testing – and in December 2016 the Lancet published results of a Guinea trial, in which none of the 11,000 people who received the vaccine developed Ebola.

However, there are obstacles to the mass usage of the vaccine. Once manufactured, Ebola vaccines have a limited shelf-life, typically around one-year, after which they begin to disintegrate and are rendered useless. This makes it impossible to stockpile vaccines over a longer period as insurance against a future outbreak.

A further complication is that each Ebola outbreak has been triggered by a different strain of the virus, with a different genetic make-up. A vaccine developed specifically for one strain of Ebola may not offer sufficient protection against another.

Other Ebola treatments were also developed during the 2014 epidemic, such as Zmapp, an antibody therapy that, when given to patients, enhances their immune response to the disease.

These antibodies, however, are proteins that must be injected because they cannot be taken orally – as they’d be broken down and rendered useless by the digestive system. But administering injections is not straightforward in Ebola outbreaks.

Healthcare settings in Africa are generally under-resourced and there is a worry about intravenous administration exposing staff to potentially infected blood, says Feldmann. This would make the provision of such a treatment difficult – even if it was available. Then there is the question of money and limited resources. Should the focus be on preventing a potential future Ebola outbreak rather than other public health issues which are already widely prevalent, such as influenza, HIV, tuberculosis and malaria, he asks.

How Ebola could make a comeback

In a surprising twist, after the 2014 outbreak the virus re-emerged in two patients that had previously recovered from Ebola. One of the patients was Scottish nurse Pauline Cafferkey, who suffered a relapse of symptoms nine months after she had recovered from the infection. This shocked Ebola experts and the medical community, as relapses had not been recorded in previous outbreaks.

‘We had never before considered Ebola as a chronic or persistent disease,’ says Feldmann. Worryingly, in each occurrence of these relapse cases, the patient will be infectious again, which could lead to further cases of human-to-human transmission, potentially triggering another outbreak months or years later, Feldmann says.

Other viruses that could make the jump to humans

Ebola isn’t the only zoonotic virus that poses a public health threat. There are several others which have caused small outbreaks that have the potential to be disastrous, and unknown others hidden in the depths of the rainforest that could cause a public health crisis in the future, according to experts.

We don’t know where the next outbreak could come from, although Asia in particular has a track record of zoonotic outbreaks, including Japanese Encephalitis, H5N1 (Bird Flu) and SARS. Munster says that anything which is genetically promiscuous enough to enter poultry or livestock is an issue, as people often come into close contact with these animals.

The newly emerging virus Nipah is one of those that worries experts most. It causes severe disease in both animals and humans, and has a high death rate (it was also the basis for the fictional virus in the 2011 Hollywood film Contagion). Its natural hosts are fruit bats of the Pteropodidae Family. Transmission of Nipah to humans can occur after direct contact with infected bats, infected pigs, or from other infected humans.

‘Nipah virus is a concern to me and many others. If the virus mutates to a variant that humans are more susceptible to, [making transmission easier,] it would be a disaster,’ says Feldmann.

In humans it has a range of symptoms, from asymptomatic infection to acute respiratory distress and fatal encephalitis, which is acute inflammation of the brain. There have been small but regular outbreaks of Nipah in Bangladesh since 2001, and it has also caused outbreaks in Singapore, India and Malaysia.

Fa says that there are lessons to be learned to learned on how we co-exist with the environment to prevent these emerging viruses causing further disasters, and that governments must regulate and restrict deforestation. ‘[The impacts of] removing forests needs to be taken seriously,’ he says. ‘Let’s hope we can influence the decision makers [and make it clear] that you disrupt the environment at your peril.’