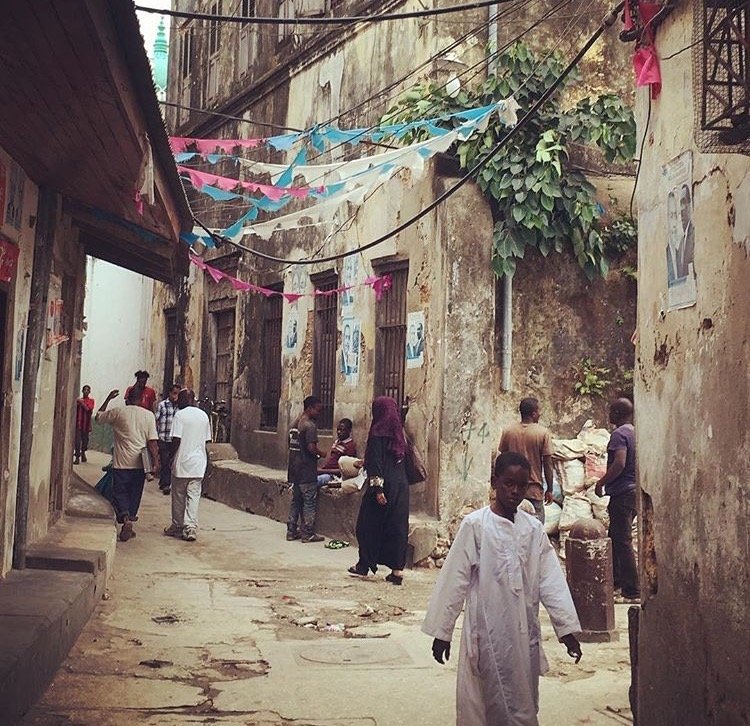 Cheap heroin – sold for as little as $3 a dose – has made its way onto the streets of Zanzibar’s capital city Stone Town. Credit: Katie McQue

Soud was born with a burden that he will carry forever. He has HIV. Passed from mother to child, the virus coursed through his veins before he even took his first breath. Now a 20-year-old man, his life has been shaped by his health status.

He lives in Zanzibar, the tropical archipelago within eyesight of mainland Tanzania, and made famous by its roaring tourism trade. About 5,500 people there have HIV or AIDS, and many of these people live in shame.

Soud’s childhood was overshadowed by discrimination. ‘There was a lot of stigma at school. From teachers, as well as the students,’ he says. Now, his life focuses around his work for Zapha+, an HIV outreach NGO based just outside Stone Town, Zanzibar’s capital.

‘I’d like to be a good man. To educate my society about how to care and how to protect. I have more pain from my HIV status because of the stigma. I want to stop it,’ says Soud.

Zanzibar’s azure waters and white sands draw holidaymakers from the west. The money tourism generates draws workers from all over Tanzania. Most are young and away from home for the first time. These migrant workers are some of the most susceptible to HIV infection due to the vulnerabilities of being in transit, sex tourism, gender based violence and increased drug use, several experts have told New Internationalist.

‘We try to improve acceptance, to support people with our HIV status and inform on how we can live a longer life. We talk to youth about how to prevent getting infected. That, ultimately, is our aim.’ Consolata John, the chairperson of Zapha+ says.

John estimates that 1 per cent of the people in the communities Zapha+ works with, which are on the outskirts of Stone Town, are diagnosed with HIV or AIDS.

The shame associated with the virus is a barrier to keeping healthy. People with HIV in Zanzibar are scared that they’ll be seen going to pick up their medicines or having their CD4+, which act as a co-ordinator of the immune response and are also the main targets of HIV, checked. They go to the hospital at night, as there’s less chance they’ll be seen in the dark, John added.

Soud and John both stress the importance of education and destigmatization in preventing new infections, and keeping those with HIV healthy.

Tourism is responsible for generating 10 per cent of the world’s GDP, and 1 in 11 jobs, according to the UN’s World Tourism Organization. With increasing tourism, including in Africa, there needs to be an awareness of the contributing risk factors for HIV transmission, according to the UN International Labour Organization (ILO).

The intense interactions between tourists, tourism workers, and local communities combine to compound people’s vulnerability to the spread of viruses, Afsar notes.

The first priority of these migrant workers is to find work, then a place to live. In many cases migrants don’t have the same access to healthcare as locals, which can make it difficult to get tested or have access to treatments, he adds.

More support is needed to educate sex workers from particularly risky practices. For instance, it’s common in Zanzibar that men buying sex request not to use a condom, if they pay more money to the sex worker, John says.

Notably, Zanzibar is a popular sex tourism destination for European women. A departure from the stereotypical sex tourist, these are commonly middle-aged women looking for a holiday romance. The transactions are nuanced. The young Tanzanian men hang around the beaches and hotels hoping to catch the eye of a tourist. A typical scenario involves the tourist being courted, given companionship and a sexual relationship, in exchange for gifts and other donations.

The ultimate aim of the Tanzanian sex worker is to become a boyfriend of the woman. If he strikes lucky, after a prolonged affair she may marry him and bring him to Europe, says John. And to forge intimacy and gain the trust of the woman, they often forgo condoms, putting the sex customer at risk.

Female migrant workers are more vulnerable to gender based violence, and account for 98 per cent of those trafficked for sexual exploitation. Roles such as domestic workers and cleaning staff, generally filled by women, are risky because they are often invisible and isolated, making them more vulnerable to abuse.

Forced sex further increases the risk of HIV transmission to women due to tears and lacerations, which gives the virus more opportunity to enter the woman’s bloodstream, causing infection.

AIDS is the leading cause of death among females aged between 15 and 44 worldwide, according to UN Women. Women who have experienced violence are up to three times more likely to be infected with HIV than those who have not.

Women fearing violence often do not feel they have the power to request the use of a condom or refuse unwanted sex. They are also more likely to choose not to be tested or receive treatment. Women are often afraid to ask for money or permission from their husbands to attend HIV/AIDS facilities. Between 16 per cent and 86 per cent of women, across different developing countries, who are aware they have HIV choose not to disclose their status to their partners for fear of violence or abandonment, according to the World Health Organization. This hastens the clinical progression from HIV to AIDS.

Drug corridor from East to West

Drug use is another HIV risk factor. Zanzibar, for instance, sits on a major corridor for drugs being trafficked from Asia to the West. Consequently, cheap heroin – sold for as little as $3 a dose – has made its way onto the streets of Stone Town. Some estimates place Zanzibar’s heroin use rate as high as 7 per cent among the general population.

HIV rates among intravenous drug users in Zanzibar are thought to be up to 30 times higher than the rest of the population, according to the UN Office on Drugs and Crime .

The use of drugs that are not administered by injection, such as cocaine or marijuana, also fuel HIV transmission, Consolata John adds. ‘People have to get money to buy it. They will sell sex to be able to buy drugs,’ she explains. ‘It’s common for young people, both male and female, to sell sex to earn money. Once they see white people they know that they are likely to be tourists and have money.’

HIV: What can be done?

Things can be done to control HIV infections among workers in tourism, particularly with the support of employers.

There are many proactive steps business leaders in tourism can take to protect their employees’ health, says Afsar. Uganda’s hotel sector, which employs 450,000 workers, provides an example. The workers are mostly young migrants. In 2008 a study discovered the HIV prevalence rate in the hotel sector was 10.3 per cent, much higher than the national average of 6.9 per cent.

In response to this, the ILO launched a Uganda Hotel Owners Association (UHOA) programme to help increase knowledge and understanding about HIV prevention among workers in the hotel sector. This initiative also encourages hotel workers to undertake testing without fear of being stigmatized or discriminated. HIV positive workers are assured of support and continued employment.

To incentivize hotels to honour these approaches, their provision of HIV care to their workers is now a factor that contributes to the star rating given to hotels in Uganda.

‘If you respect human rights of people, you succeed in your public health response. Discriminating laws and attitudes need to change. People will not take the test if they associate HIV with discrimination and fear they will lose their job,’ says Afsar.

Great strides have been made in the global effort to combat HIV. By mid-2016, 18.2 million people living with HIV were receiving antiretroviral therapy (ART) globally, according to the WHO. And, for the first time, there are 5 million people with HIV aged over 50-years-old, showing that treatment is working. ARTs also reduce the amount of virus particles (viral load) circulating in a patient’s blood, lowering their chance of transmitting HIV to others.

It’s important to note that AIDS is not over, however, and continues to be a major public health issue, Afsar stresses.

Treatments need to be readily available in order for medical systems to get HIV under control. Through international and domestic funding, including the Global AIDS Fund, more than 18 million people in the world are receiving HIV medication.

Western nations slashing AID budgets can be disastrous in controlling HIV. U.S. President Donald Trump’s administration has recently proposed a budget that would cut U.S. funding for global health programmes including efforts focusing on HIV/AIDS, tuberculosis and malaria, by about one quarter, to about $6.5 billion for 2018.

Trump’s budget proposal envisions cuts to the President’s Emergency Plan for AIDS Relief (PEPFAR) programme, a cornerstone of U.S. global health assistance, which supports HIV/AIDS treatment, testing and counselling for millions of people worldwide. Under the new budget, PEPFAR funding would be $5 billion per year compared to about $6 billion annually now, the U.S. State Department has said.

Cuts to HIV programmes can mean that some patients, especially in poorer countries, will not have access to medication as their governments rely on international funding to afford to provide medicines.

‘Donors need to support the issue,’ says Afsar. ‘Any slow-down in funding can be disastrous.’