British armed forces offered to attempt to rescue nearly 300 Nigerian schoolgirls kidnapped by the Islamist militant group Boko Haram, but were rebuffed by Goodluck Jonathan, Nigeria’s president at the time, the Observer has learned.

In a mission named Operation Turus, the RAF conducted air reconnaissance over northern Nigeria for several months, following the kidnapping of 276 girls from the town of Chibok in April 2014. “The girls were located in the first few weeks of the RAF mission,” a source involved in Operation Turus told the Observer. “We offered to rescue them, but the Nigerian government declined.” 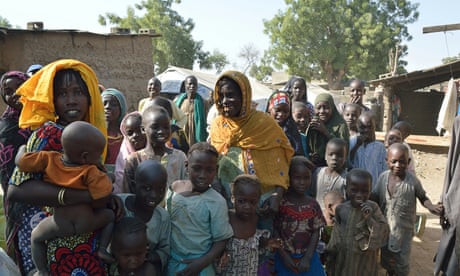 Read the story on the story on the Guardian.com:  https://www.theguardian.com/world/2017/mar/04/nigeria-declined-uk-offer-to-rescue-chibok-girls
The girls were then tracked by the aircraft as they were dispersed into progressively smaller groups over the following months, the source added.

Chibok is located in Nigeria’s north-eastern Borno state. Today 195 of the girls are still missing. Those who have managed to escape from their kidnappers have told of a life of torture, enslavement, rape, and forced marriages in captivity.

Notes from meetings between UK and Nigerian officials, obtained through the Freedom of Information Act, also suggest that Nigeria shunned international offers to rescue the girls. While Nigeria welcomed an aid package and assistance from the US, the UK and France in looking for the girls, it viewed any action to be taken against kidnapping as a “national issue”.

“Nigeria’s intelligence and military services must solve the ultimate problem,” said Jonathan in a meeting with the UK’s then Africa minister, Mark Simmonds, on 15 May 2014.

A document summarising a meeting in Abuja in September 2014 between Nigeria’s national security adviser and James Duddridge MP, former under-secretary of state at the Foreign Office, shows Operation Turus had advanced to the point where rescue options were being discussed. Minutes from a meeting the following month between Major-General James Chiswell and Jonathan hinted at the frustration felt by those trying to prompt some action from Nigeria.

“[President] Jonathan was still focused on ‘platforms’. General Chiswell said again we could offer advice on what equipment might make sense and how weapon systems might be best deployed,” the October 2014 document stated.

Jonathan has drawn criticism at home and abroad for a lack of action and perceived apathy over the kidnappings. The government was slow to mount any response in the weeks after the girls were taken. The governor of Borno, Kashim Shettima, also publicly criticised Jonathan for failing to even call him or any other state official for 19 days after the kidnappings. Jonathan also hit out at the worldwide #BringBackOurGirls campaign, branding it a “manipulation” of the victims of the attack.

Boko Haram had raided the dormitories of the government secondary school at Chibok. The girls staying there had braved warnings of an attack to sit their final examinations. Boko Haram looted the school and then burned it to the ground. The kidnappings also blighted the lives of the girls from the town who were not taken away, as many have been too scared to continue their education.

In addition to Nigeria, Boko Haram is active in regions of Cameroon, Chad and Niger. According to Unicef, more than 1.3 million children have now been displaced. Some of those taken by Boko Haram have been forced to become child soldiers: one in five suicide bombers in Nigeria are believed to be children, and three-quarters of those are girls.