11 June 2018 – FOI documents reveal the US navy is keeping ships at the controversial naval base so close together they risk catastrophe. Katie McQue reports

‘The risks of anchoring ships closely together are moderate, the consequences of an explosion are catastrophic, but maintaining the warfighting capability at Diego Garcia is paramount since no other alternative is available.’

This is an excerpt from a cache of documents that reveal the UK-owned Indian Ocean island of Diego Garcia is continuously subjected to explosive hazards that could threaten the lives of some of the 4,000 US military employees living there, and destroy part of a world-class conservation area.

This explosive hazard may also be a reason why Diego Garcia’s former inhabitants – who were forcibly expelled and made refugees in the 1960s and 1970s – are being prevented from resettling in their former homeland, the documents, as well as comments made by the United States Navy, indicate. 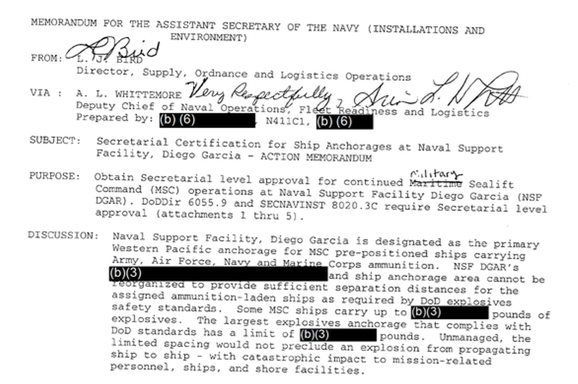 Diego Garcia is home to one of the United States’ largest overseas military bases. Up to 20 warships carrying bombs and other ammunition can be anchored in the island’s lagoon at any one time.

Due to the small size of the anchorage, these ships must be positioned closer together than the normal US Department of Defense safety guidelines allow. There is a significant risk that if one of the ships detonate, it could ignite several ships in its proximity, causing a cascade of further explosions and damage, the documents reveal.

‘Unmanaged, the limited spacing would not preclude an explosion from propagating ship to ship – with catastrophic impact to mission-related personnel, ships and shore facilities,’ one of the documents, obtained through from the US Department of Defense through Freedom of Information requests, states. ‘The Marine Corps position is that the net explosive risk at Diego Garcia is unavoidable.’

A memo authored by the US Navy states that damage to be expected within the area of an explosion includes serious injury or death, eardrum rupture and lung injuries, and extensive damage to vessels:

‘A. Serious injury or death to personnel is likely from the blast and from fragments and debris resulting from the blast, B. 20% risk of eardrum rupture and serious lung injuries may occur, C. Vessels containing explosives are likely to be damaged extensively and delayed propagation of the explosion may occur.’

For decades Diego Garcia has been shrouded in secrecy, with access restricted only to government officials, the military, and civilian contractors working on the base. Journalists are banned from setting foot on the island by both the UK and US governments.

Diego Garcia is the largest island of the Chagos archipelago, which lies in remote waters equidistant from Tanzania and Indonesia. To the United States, the military base there is of great strategic importance because of its relative proximity to Middle East, the Persian Gulf, South Asia, and Southeast Asia, allowing the Pentagon to react quickly to events there.

It was a base used to conduct operations related to the wars in Iraq and Afghanistan. US Navy nuclear submarines call at Diego Garcia for resupply and crew changes, and it also has a massive landing strip used by bombers and other military aircraft. The island was also involved in the CIA’s post-9/11 secret rendition programme, with terror suspects being secretly transported for interrogation and torture.

Controversy already swirls around the island. In the 1960s, the British Government ran down the coconut plantations and evicted the indigenous Chagossian population, before signing an agreement with the United States allowing it to build the military base and occupy the islands. As part of the eviction, Chagossians’ pet dogs were shot or gassed with the help of the US military, causing mass fear and grief.

They were made refugees. dumped on the docks of Mauritius and Seychelles. Much later, in the 2000s, some were given British citizenship and moved to the UK, but families have been split up and children prevented from joining their parents. To this day the UK Government continues to ban them from returning to their homeland.

‘They destroyed everything, you had to take what you could very quickly and run, just some clothes,’ says Ginette Charles, who was four when her family was driven off the island. ‘They burned everything.’

For years the Chagossian refugees have engaged in legal battles in the UK courts, fighting for the right to return to their homeland. Except for one brief legal success in 2000 – overturned by the UK Government in 2004 – subsequent challenges have been unsuccessful.

Because of the importance of the base to the US military’s overseas capabilities, in 2000 the US Navy sought to obtain from the US Department of Defense a permanent exemption from the rules governing minimum distances between ammunition-carrying warships that are anchored at Diego Garcia. Sources have confirmed that the UK government is kept briefed on military activities and the explosive risk on Diego Garcia.

These exemptions, known as explosive safety waivers and secretarial certifications, have been in place ever since.

Notably, the regulatory requirements that need to be met to obtain these permissions may actually be a reason why the Chagossians are not permitted to return to their homeland, the documents show.

Several US Navy-authored memos submitted during requests for these exemptions repeatedly highlight: ‘There are no off-station facilities affected by this exemption request. The Navy Support Facility, Diego Garcia is located on an island in the British Indian Ocean Territory, and is operated by U.S. Navy. All island personnel work in support of the Navy’s mission.’ 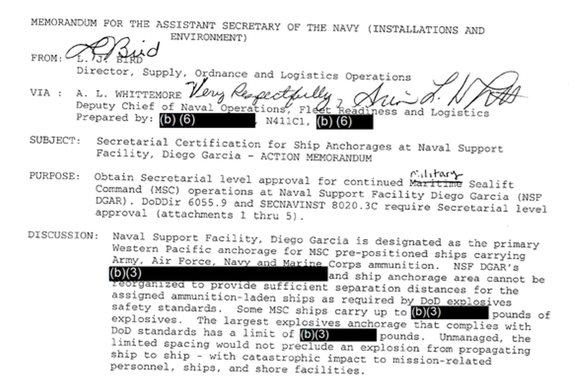 The statement indicates a condition for obtaining and maintaining these exemptions is that people who do not work at the military base are not in the vicinity of a potential explosion. This could be impacting the Chagossian refugees’ fight for the right to return to the tiny, 30-square kilometer island, and live there as civilians who are not involved in the military operations. When asked if this is the case, a spokesperson for the US Navy stated: ‘As a general rule for ammunition handling, Navy policy requires the area to be off limits to non-essential personnel when munitions movement is taking place.’

The UK government’s Foreign Office declined to give an on-the-record statement on the matter.

‘I have no doubt the US Government would be uneasy about Chagossians returning to the island given the potential firework display that would accompany such an explosion,’ says Richard Dunne, a former Royal Navy Officer, scientist and lawyer who assists the Chagossian’s legal team. ‘Much secrecy still surrounds the true nature of the “defence and security interests” cited by the UK Government in November 2016 as a reason for preventing Chagossians returning to their home, but we can have no doubt that US interests were again significant factors.’

The Fight to Return

In a move seemingly intended to appease the Chagossians, the international auditing firm KPMG was hired by the UK government in 2014 to conduct a feasibility study on whether the Chagossians could be permitted to return to their homeland and whether it would be possible for them to make a life on Diego Garcia or other islands of the archipelago.

In a 329-page report KPMG concluded that the return of some Chagossians was feasible. However, the report did not address the US Navy’s utilization of Diego Garcia in any detail. When asked by New Internationalist whether KPMG was supplied information on the military base’s explosive risks for the study, a company spokesperson responded: ‘The information you have provided was not considered in our report.’

KPMG’s findings, however, turned out to bear little clout with the very government that had commissioned it in the first place. The UK Foreign Office hit back at the findings saying the costs and liabilities for the UK taxpayer were uncertain and potentially significant, with some estimates putting them around £60 million.

In 2016 the findings were disregarded altogether, as the Foreign Office ruled against a resettlement, citing feasibility, defence and security interests, and cost to the British taxpayer. The UK government then proceeded to extend the base’s lease the United States for a further 20 years.

The Chagos islands are well-known as an important environmental reserve for terrestrial and marine habitats, including a rich and diverse coral ecosystem. In 2010 the UK government declared a no-take Marine Protected Area throughout the Chagos archipelago, stretching to 200 nautical miles beyond the islands. This prevents extractive activity like fishing, on which a resettled Chagossian population might have to rely. A US Embassy cable from 2009 revealed by WikiLeaks[links to Wikileaks website] records the then British Indian Ocean Territory Commissioner, Colin Roberts, saying that establishing a marine reserve was an effective long-term way to prevent the Chagossians from ever resettling.

While the explosive hazard does not impact the waters encompassed by the Marine Protected Area, which conveniently does not include Diego Garcia and its three-nautical-mile territorial sea, there are other protected conservation sites on the island that would be affected, raising questions over the authenticity of UK government’s conservation concerns for the Chagos.

If an explosion of the type envisaged by the US Navy did occur on Diego Garcia, it would undoubtedly result in the destruction of the flora and fauna along a 7km land portion on the eastern side of the atoll which would lie within the explosive arc and lead to extensive underwater damage in the northern end of the lagoon. Both the lagoon and land lie within a restricted conservation area protected under the RAMSAR Convention – an intergovernmental treaty that provides the framework for national action and international cooperation for the conservation and wise use of wetlands and their resources.

A 2008 report revealed through a Freedom of Information request to the UK Foreign Office confirmed that the mooring of the US warships in the lagoon was causing further damage to the island’s corals. ‘One third of the lagoon’s area of richest coral, is anchored on at various times and intervals,’ states the document.

Environmental concerns due to the military’s activities on Diego Garcia have long pained the Chagossian refugees, who say they know how best to care for the island they call home.

‘I want the UK and US to let us Chagossians return, as we should be the guardian of our motherland. Having a homeland is a fundamental right, and we will keep fighting no matter what,’ says Sabrina Jean, a second generation Chagossian in exile and the UK chair of the Chagos Refugees group. ‘They don’t let us return, but you read and hear about what they are doing on Diego Garcia and I think they are the dangerous ones.’